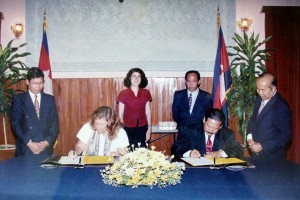 Registering UofN Cambodia as an NGO in 2002

Because of the turmoil in Cambodia after the Khmer Rouge regime, refugee camps were formed on the Thai side of the border in the 1980’s. Youth With A Mission (YWAM) served in these refugee camps in those years. In 1991, Cambodia opened up to foreign aid, so under the leadership of Philip and Wendy Scott, YWAM Cambodia was formed to provide medical care, community development, English teaching, and church planting in Stung Treng province along the Laos border.

In the year 2000, a new team of YWAM workers was formed in Phnom Penh with the vision to host short-term teams and provide training for Khmer (Cambodian) youth. Through this team, University of the Nations, Cambodia was officially registered with the government in 2002. A few months later, we held our first Youth Training School (DTS) and we regularly hosted incoming short-term teams.

Since that time, we have expanded to include ministries that help children at risk, a dormitory and education assistance program, programs for university students, and several education centers that provide teaching in English, arts, and office skills. We now operate in seven different provinces, including the major centers in Phnom Penh, Battambang, and Siem Reap.

In addition to YWAM Cambodia and UofN Cambodia, there are two additional YWAM entities that operate in Cambodia.

Center for Southeast Asian Studies is lead by Koreans. They work with research, community development and children and educational programs in several villages in Kampot. They also run a dormitory for female university students in Phnom Penh.

RTC Cambodia is a fruit products factory that employs landmine victims, started by Marion Fromm in 2004. This is significant because normally begging is the only option for income for landmine victims. They market their products (such as dried fruit and jam) under the name Harvest Cambodia.